Meet MiniPanther.Money - The DAO Everyone Is Watching

The Minotaur.Money team is launching MiniPanther.Money, a special purpose decentralized autonomous organization (DAO), on the Fantom network. MiniPanther will operate under the DAO mechanics of staking and bonding, but supply expansion will last only 14 days with 80% of the treasury besides liquidity pool tokens used for buybacks on day 15. Afterward, MiniPanther will become the meme token of the Fantom network: Part of the house proceeds will be donated to black cat-related charities.

The concept of MiniPanther is partially inspired by recent troubles involving the governance and token supplies of major DAOs. Rebase staking tends to produce too many tokens, and DAO treasuries can be mishandled. MiniPanther addresses both of these issues by limiting supply expansion to 14 days and by disabling the regular treasury withdrawal function. Therefore, administrators have no direct access to treasury funds. The 80% treasury buybacks will be conducted on day 15, and afterward, a publicly callable function will finish all buybacks.

After the buybacks are complete, MP will become the meme token of the Fantom ecosystem. MiniPanther will use the selling tax system from Minotaur.Money to continue offering rebase-staking rewards even after all supply expansion has stopped. The team also plans to use DAO tokens to incentivize outside staking pools for holders to earn double yields, similar to Minotaur Money’s staking program with Mad Meerkat Finance.

Part of the house proceeds will be donated to black cat-related charitable causes. MiniPanther has received a video endorsement from Carole Baskin of Tiger King emphasizing this aspect. 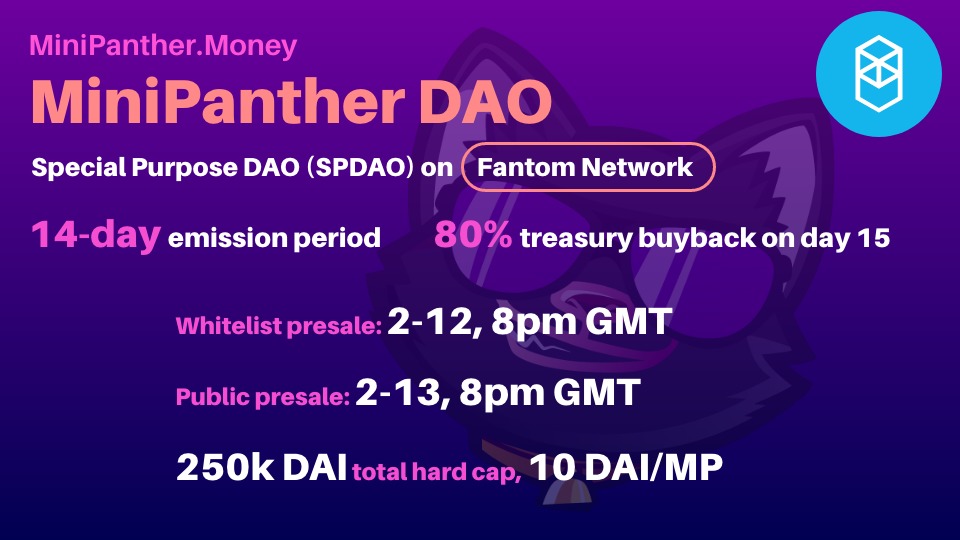 The team has completed Know Your Customer requirements with Assure DeFi, and the code has completed a preliminary audit with TechAudit. The team has an established reputation that includes five previous staking protocols and three independent decentralized apps without any exploits on record.

The net effect should be an exciting short-term game that has never been executed properly: MiniPanther will bring the concept of fast-and-furious 14-day layers to decentralized finance (DeFi) 2.0.

MiniPanther DAO is a special-purpose DAO on the Fantom network. Its supply expansion lasts only 14 days, followed by 80% treasury buybacks on day 15. Administrators have no direct access to treasury funds, and a selling tax means that stakers will still receive rewards when MP becomes a meme token. Part of the proceeds will be given to black cat-related charities.